The game has a long history going back to the early 2000's when originally created. Since its original creation the game has existed in many different forms and flavors that were developed by active teams. Unfortunately, time has eroded all these projects and the number of available servers for players has dwindled.

While ROSE's artistic style has withstood the test of time, the gameplay leaves a lot to be desired in the context of modern gaming. The days of grindy MMOs which take hours upon hours to complete have since passed. Without a refresh to the core gameplay concepts, we fear that ROSE would slowly slip into history as players move on to other games.

The goal of ROSE Next is to simply preserve the original essence and world of ROSE Online while updating the game to make it more fun. For us, this means keeping all the fun parts of ROSE while refreshing the less fun parts. Our mission is to create a better experience in the already familiar world of ROSE.

To achieve our vision will require a signficant amount of development work but we are excited about this project. We've already been working on things for some time now and are slowly working towards releasing the game. We hope to use this blog to share in our progress and get you excited too!

If you're excited by the idea of a new ROSE experience focusing on fun and social gameplay while preserving the original game then be sure to stay up to date on this blog. We also recommend signing up for the newsletter on the main site: https://www.rosenext.com. If you'd like to be more active in the development then please join our Discord Server!

We know that veteran ROSE players often have questions about what the server will be like so we've tried to capture the most frequently asked questions here. We're still making design decisions and testing thing so these answers are preliminary.

Q: Is this an iROSE or EVO server

A: Due to technical reasons and availability of code, our server uses iROSE as its base. However, it will probably diverge eventually from either of those two version as we customize things.

Q: What is the exp/drop/etc. rate?

A: We are currently aiming for a mid-rate leveling experience. While we haven't finalized our testing to establish an exact pace, we are aiming for a good balance between grinding and advancement. Our goal is that it shouldn't take you months to get to the highest level but it also should take more than a couple of days of casual play.

Q: When will the server be released?

A: We don't have a targeted release date as we are still fixing a lot of things. The original code we are basing our work off has a lot of bugs that need to be patched. We also want to fix up the core gameplay before initial launch. Our expectation is to release in a few months.

Q: Will the server have reborn/offline-vending/etc.

A: We know that players have become used to the features offered by other servers. While we have plans to include some of these features (e.g. offline-vending, partying saving, etc.), these will not be available for some time.

Q: What is the level cap?

A: We are currently keeping the level cap at 100. This might come as a surprise to experienced ROSE players who are more used to the historical 210, 220, etc. level caps. This aligns with our desires to focus on end-game content rather than sticking with the "grinding" mentality. By keeping the level cap low, we can focus on more diverse, quality content rather than quantity. We will be rebalancing some parts of the game content to fit within our new level cap.

In this section we want to share some of the features we've implemented and design decisions we've made. Please be aware that things are still a work-in-progress so the final details before release might not match what we have now.

ROSE was originally designed to be played collaboratively with advantages given to parties, especially those with clerics. Early on players discovered that the most effective way to play was to create two accounts and play them concurrently. Unfortunately, dual-clienting has almost become a fundamental requirement of playing ROSE with it being very challening to play any other way.

One thing we are experimenting with is a scaling global PvE buff. This buff would only be enabled in PvE zones and would not be active in PvP zones. The buff would scale as you level and be similar to a cleric's buffs. However, we don't want to dimish the cleric class so these buffs would be slightly weaker. Partying with a cleric would still be advantageous. Currently the system looks something like this but it is still a work-in-progress and has not been fully tested.

As you level, these buffs would scale accordingly. At level 100 the buffs would be equivalent to a cleric's buffs with 300 int. If a cleric has buffs that are stronger than the global buff then the cleric's buff is used instead.

The main idea here would be for the buff to aid in leveling and enable players to level "solo" but players would still be encouraged to level in parties as a good cleric still brings a lot to the table (heal, party buff, etc.) 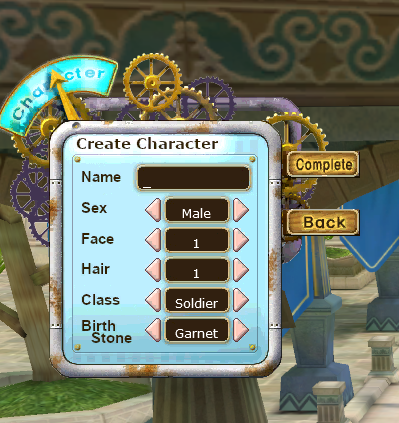 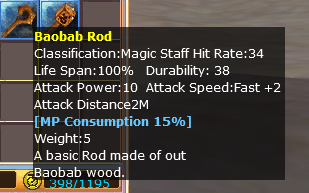 When starting a new character in ROSE you're typically given a visitor look and a wooden sword. You're then set off to kill jelly beans and choropies. If you're lucky you might get a bamboo spear or short sword drop after killing enough monsters. Unfortunately, all these weapons require STR to be used effectively so this forces you to build your character as predominantly strength based until you could afford a new weapon or make it to level 10, get a job and reset your stats in zant.

We feel that this progression is not fun. Players should be able to start playing in their desired play style from the beginning and not be forced to play as "visitor" for 10 levels.

As such, we are adding a feature where the player's first job can be selected during character creation. We have also created a new tier of items designed for level 1 so that players can immediately start building the correct stats early on. Picked "muse" on character create? You'll get a beginner staff and wand to fight and you can start building your INT stats right away!

We've set our level cap to 100 so that we can focus on end-game content and not be stuck designing infinite progressions. Leveling can be fun but it shouldn't be the only thing to do. We will be retrofitting the existing content for level 100+ so that it fits in to the new level cap. We will also be creating new leveling areas to support the new level cap. Keeping the level cap low will allow us to experiment with interesting concepts such as multiple equipment types with different base stats for the same level, multiple weapon types, etc. We'll also be adjusting skill and stat points so that they make more sense for the new level range. 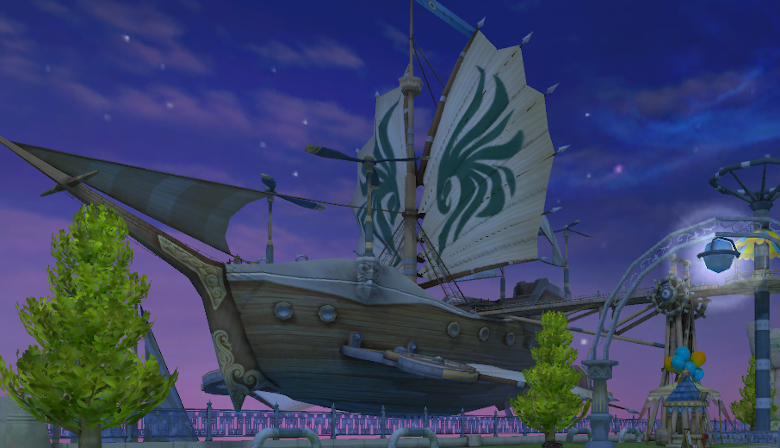 With our new level cap we've also decided to restrict the initial game to Junon only. One reason is that the existing content for the other maps is designed for different level ranges. As such we would need to rework that content to make it fit our current designs. Another thing is that the more maps there are the more players get spread out from each other. In other ROSE versions it was not uncommon to find that lower level maps were completely empty while the final maps were overpopulated. We don't think it's particularly fun to be level 10 grinding on your own in a lower level map with hours going by without you seeing anybody because everyone else is level 210 and several maps away. Our plans are to improve the diversity and richness of Junon before we start integrating other maps and planets.

We hope that this post was a good introduction to the project and some of the things we are working on. We are looking forward to making more progress and sharing it here you!